What we’re up to

ITSAZOO is heading in to a very prolific period.  I thought I’d give you a bit of a look at what we’ve got coming up – whet your appetite for the sweet theatre ahead.

This Friday we have 10×10 volume 9 at Spectral Theatre.  It’s the Spring Break edition

of 10×10.  We’ve got a really unique and wicked line up.  Here are the most recent additions:

-Glen Callender presenting an educational guerilla theatre piece on behalf of CAN-FAP (Canadian Foreskin Awareness Project). I’m not making this up. It’s actually happening.
– Meaghan Chenosky performing a multi-charactered one woman show.
– A solo performance piece inspired by “crap from my mother’s basement”.
– Chris Cochrane as a janitor with an over-active imagination.
– New excerpts from Sebastien Archibald’s one man show “This Narrative Is Unsustainable”

There will of course also be lots of cheap beer and wine. 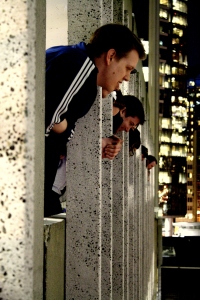 happening June 8-25 at the Metro Parkade in the heart of the business district.

After the success of last years show we decided we had to do a second bigger and better incarnation. This year features two new companies, all new short plays, music every Saturday night on the rooftop presented by Wachu, and as always the magical roving bar.  Participating companies this year include ITSAZOO, Enlightenment Theatre, Monster Creative, Slam Ink, Genus, Tigermilk Collective, Spectral Theatre and 411.

Tickets are already on sale and available at Brown Paper Tickets.

CHAIRS: A PARABLE AT THE NEANDERTHAL FESTIVAL 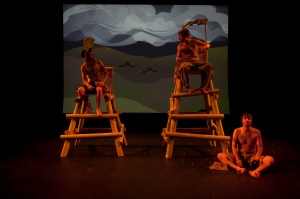 Onsite is a project that allows artists and companies to develop site-specific pieces of theatre under the mentorship of The Only Animal.  The resulting show will be performed as a part of the Vancouver Fringe Festival in September.  We have  a long way to go but so far we’re thinking a post-apocalyptic comedy on the water in boats.  More to come on this project as it takes shape…

AND ONE BY ONE – A New Promenade play by Mack Gordon

The interior of the Roedde House

This Halloween we will be presenting a new show two years in the making. The play is currently titled And One by One.  It is a site-specific promenade play based on the stories and poems of Edgar Allan Poe by the awesome emerging playwright Mack Gordon.  Think Poe meets 80s slasher flick meets haunted house.  We’ve booked the Roedde House Heritage Museum in the Westend the we’re going to bring it to life with Poe’s tales of macabre.  This is going to be a good one that is not to be missed.

So that’s what’s keeping us busy…very very busy – in a good way.  For more info on any of these shows you can check out our website www.itsazoo.org.