ITSAZOO is excited to present our 2016/17 Season! Featuring two dynamic, provocative experiences that will completely immerse you…whether you like it or not.

Ever wanted to experience the thrill of a horror film in real life?! No…? Well, then this isn’t the show for you. But if you have then we invite you to participate in HIDDEN, a terrifying and paranoid experience designed for intimate audiences of 13 people. Join ITSAZOO as we take you on The Lost Lovers Murder Tour, a frighteningly accurate reenactment of the infamous murders that took place exactly 20 years ago in the woods on the outskirts of the UBC campus. The killer was never caught and it’s rumoured that the ghosts of his victims haunt the woods. But, don’t let that dissuade you. We guarantee everything will work out fine…probably. 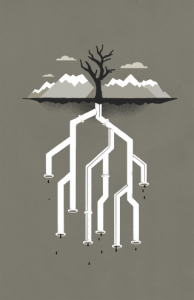 Presented as part of the Gateway Theatre’s 2016/17 Season! The Pipeline Project is a provocative and comedic foray into a firestorm of debate – part verbatim theatre, part personal storytelling and part meta-fiction. The story focuses on three theatre artists – two first nations and one white – who team up to create a play confronting pipeline expansion in BC. This project sends each character on a journey of self-reflection and discovery as they struggle to dramatize current events while navigating their cultural differences, opposing worldviews, and prejudices. Peak oil, First Nations land claims, and climate change are all explored with humour and empathy in this timely meta-theatrical event.