The Competition is Fierce… brace yourself Vancouver – new 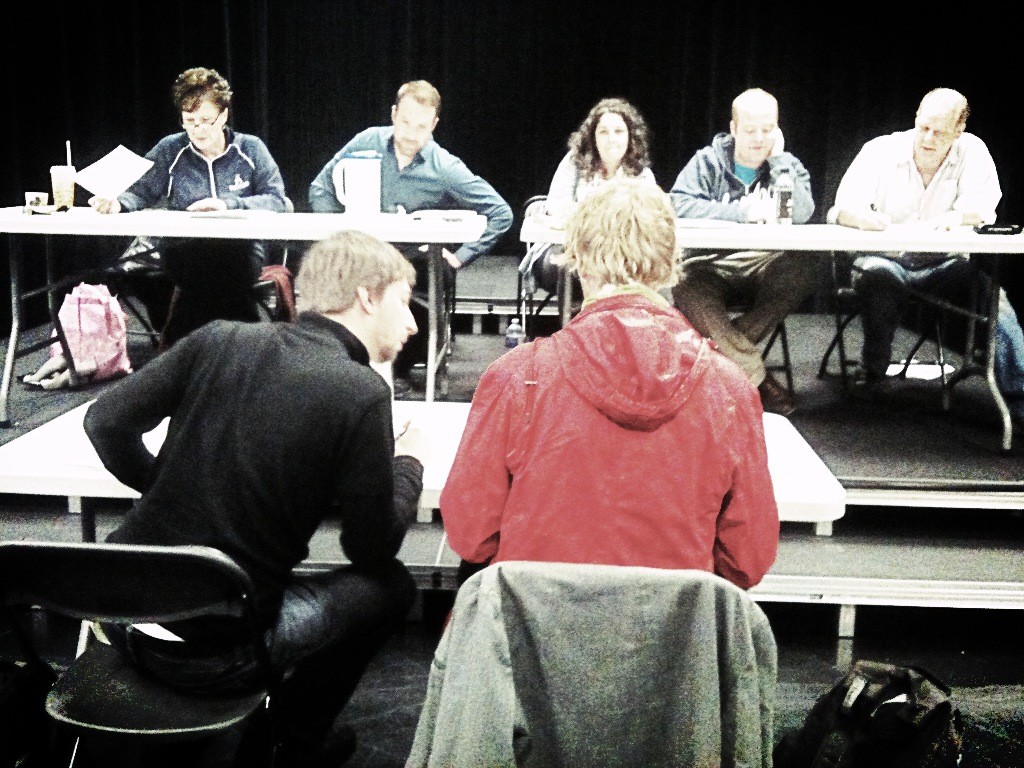 When Sarah Kane’s Blasted premiered in London in 1995 the critics raged, people vomited (literally) and it was instantly panned as a failure. The rawness and reality of Kane’s writing was too much for the audience. Fast-forward 18 years and Blasted is a contemporary classic. As writer Sebastien Archibald dryly delivered stage directions for The Competition is Fierce on Sunday night at the intimate CBC Studio 700, it instantly brought Kane’s Blasted to mind. The 40 or so audience members groaned, squirmed, laughed and cringed as they were forced to imagine some colorful scenes. That’s the great thing about staged readings; you, the audience, get to use your imagination and with daring writing like Archibald’s the visuals are horrifically rich.

The Competition is Fierce pits two corporate ladder climbers against each other in the most dark and absurdly hilarious battle. John (Chris Cochrane), feeling the pressure from a family past that haunts him, steps up to the challenge of a promotion that Carlyle his boss (Andrew Wheeler) offers him. Little does he know that a charming new co-worker is set to rival him for the acclaimed position. Despite feeling betrayed John charges forward switching between complete confidence and crippling insecurity. His narcissistic rival (Colby Wilson) worms his way towards the top spot with every charming trick he can pull out of the bag including seducing John’s new colleague-girlfriend (Rachel Aberle). The lengths they’re forced to go are far and beyond any sane person’s comfort level. Holding the reigns of the competition, completely unhinged, is CEO Madeline (Patti Allan), whose corporate career only resulted from a lack of brothers.

Even as a seated, staged reading it felt like we were being taken on a journey, a journey that maybe we didn’t want to go on at times but once we were in, we were committed and there was no turning back. One thing Archibald always succeeds at is lulling an audience into a false sense of happy security before taking them around the corner to a dark alley with a shady figure hovering nearby. Laugh-out-loud moments quickly shift to grave concern and back again before you know it. This is not theatre for the faint-hearted; think Sarah Kane meets David Mamet. ITSAZOO are going to have a fantastic time pulling this one off and I have no doubt the end result is going to shake up even the most open-minded of Vancouver theatre-goers. Stay tuned for dates!