Welcome to The Zoo 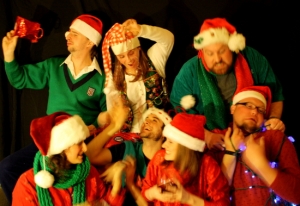 We are the ZooCrew and this is our first ever blog post.  Welcome to our world!

ITSAZOO is a theatre company that began back in 2004 when 3 theatre students at the University of Victoria produced The Zoo Story for a Theatre Festival.  It was such an awesome experience that they decided to keep going and here we are today!  Since 2004 the company has moved from Victoria to Vancouver, become a non-profit incorporated society, had a shift in artistic directorship, produced more than 10 original Canadian scripts, 5 outdoor promenade shows,  started a one-night theatre festival called 10×10 and expanded from a company of 3 upstart students to crew of 7 young artists ready to attack the Vancouver theatre scene.

This summer ITSAZOO is producing a modern adaptation of Robin Hood in Queen Elizabeth park. It’s going to be a heavily satirical promenade production influenced by The Colbert Report, Bread and Puppet Theatre, and the great agit-prop of our time.

Over the next few weeks I’ll introduce you to the crew and give you a sneak peak as we get started on rehearsals for Robin Hood.

-Chelsea (aka the ring leader)